Pop quiz: Which is better for you, an apple or a high-fibre cereal bar? Fruit yogourt or deli chicken? Instant oatmeal or orange juice? The answers aren’t always easy to figure out, and in 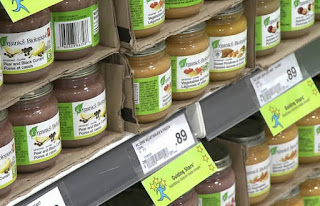 many ways, it depends on what you are looking for. But a new movement has food scientists and nutrition experts developing tools that can rank foods according to nutrition value; the hope is to provide consumers with the opportunity to make better choices, without needing a PhD in label reading. Since major retailers are now starting to take notice, let’s take a closer look at one of the newest and most promising programs out there.

Launched in September in Canada by Loblaws, Guiding Stars is a refreshingly simple program that ranks foods according to nutritional value. The program is based on an algorithm devised by Kelley Fitzpatrick, a nutrition consultant specializing in regulatory affairs, and Dr. Alison Duncan, an associate professor of nutrition at the University of Guelph. Foods are credited (gain points) if they are rich in vitamins, minerals, dietary fibre, whole grains and omega-3 fatty acids. Conversely, foods can be debited (lose points) for containing too much saturated or trans fat, added sugar or sodium.

The most nutritious foods — think broccoli, apples, salmon and the like — can receive the highest grade of three stars. Foods that have some nutritional value, but also feature some less-than-healthy elements, such as added sugar (like fruit yogourt), added salt (think deli chicken) or too much saturated fat (cheese would be an example) are debited points and can receive a rating of one or two stars. Nutritional duds — we’re talking the Ho Hos of the world — receive the proverbial bagel, or zero stars.

Unlike other programs, Guiding Stars deserves full marks for evaluating all types of food, including fruits, vegetables and meats. Most other programs currently in use, including Heart and Stroke’s Health Check program, only assess foods with nutrition labels, which allows packaged or processed foods to benefit from the positive impression that comes with a health check, while nutrient-rich produce is left unattended.

Guiding Stars also did itself a service by adjusting its algorithm according to the food category being rated, which means lean meats and fish aren’t unfairly penalized for containing modest amounts of saturated fat, and nuts aren’t faulted for being high in fat and low in fibre. This a particularly refreshing take when, so often in the past, foods such as almonds, olive oil and avocados have been faulted for their fat content, despite the fact a preponderance of research suggests they are important for good health.

Finally, one of the best elements of the Guiding Stars program is that it is in no way influenced by any brand, industry or the price of a given food. It is an objective look at the nutrient density of a food, and is much simpler to understand than a label or ingredient list could ever be.

If there is a place to criticize the Guiding Stars program, it is for the fact that the data they use to assess certain foods is limited to the core nutrients that are mandatory on Canada’s nutrition facts panel. At this time, any food carrying a nutrition label — we’re talking about the stuff that comes in boxes, bags and packages — must include data on just four vitamins and minerals: vitamin A, vitamin C, calcium and iron (a company can add more nutrients, such as vitamin D or folic acid, at their discretion).

While each of these four nutrients are important for some element of our health — vitamin A is used by our bodies for bone and eye health, vitamin C serves as an antioxidant, calcium helps to build strong bones and teeth, and iron is important for building and maintaining a part of our red blood cells, known as hemoglobin — there are many other important nutrients that are not part of this list; for example, foods rich in magnesium and potassium play a role in both bone health and healthy blood pressure control. Since these nutrients appear only rarely in packaged food, some highly nutritious food, such as frozen berries or dried lentils, can be left looking nutritionally mediocre. At the end of the day, however, this is not an issue with the Guiding Stars program, but rather with the current state of nutrition labelling: the people at Loblaws can only do so much with the information available.

We are all free to choose the food we want to eat. A program like Guiding Stars is not intended to tell people what to do, or how much to eat; instead, its purpose is to provide an easy, relatively transparent way for consumers to make healthier choices. And in a world that seems to make nutrition ever more confusing, that is a refreshing change.

– Jennifer Sygo is a dietitian in private practice at Cleveland Clinic Canada in Toronto.