MONDAY, October 24, 2011 (Health.com) — People who struggle with insomnia appear to be more prone to heart attacks than those who typically get a good night’s sleep, a large Norwegian study has found.

In the study, published today in the American Heart Association journalCirculation, researchers conducted a comprehensive health survey of more than 52,000 adults, which included questions about slee 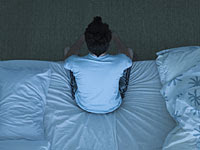 p quality. Over the next 11 years, roughly 5% of the participants had a heart attack for the first time.

Compared to solid sleepers, those who had trouble falling or staying asleep nearly every night were 45% and 30% more likely to have a heart attack, respectively, even after the researchers took into account age, blood pressure,cholesterol levels, and other factors that can contribute to heart disease. People who reported feeling tired or unrefreshed after waking up at least two mornings per week were also at greater risk.

“Cardiologists do not talk regularly about sleep issues with their patients,” says lead researcher Lars Erik Laugsand, MD, an internist in the public health department of the Norwegian University of Science and Technology, in Trondheim. Although he and his coauthors suggest that these conversations may be helpful for assessing heart disease risk, Dr. Laugsand says that further research will be needed to determine how insomnia might affect heart health, and whether treating sleep problems can actually prevent heart attacks.

Cardiologist Suzanne Steinbaum, DO, who directs the Women and Heart Disease program at Lenox Hill Hospital, in New York City, agrees that more research in this area is needed, but she says she already discusses sleep issues with her patients. Stress reduction is a key to preventing heart attacks, she says, and lowering stress is all but impossible if you’re not getting enough sleep.

“We don’t know how significant the sleep disturbance must be, or how long it must persist for it to become significant for heart disease,” Steinbaum says. “But it is safe to say that there is some correlation.”

Stress, depression, and other psychological problems often overlap with sleep difficulties. Dr, Laugsand and his colleagues did factor depression and anxiety symptoms into their analysis, but neither condition had a substantial impact on the results. Other factors involving metabolism or blood-vessel health—such as inflammation—may be involved in the apparent link between insomnia and heart disease, the study notes.

Insomnia is the most common sleep problem in the United States. Roughly one-third of Americans experience occasional symptoms, and nearly 10% say they have chronic insomnia, according to the National Center on Sleep Disorders Research. Insomnia tends to occur more frequently with age, and some studies suggest it may be more prevalent in women.

Although insomnia is common, adequate and lasting treatment for it is not, says Susan Zafarlotfi, PhD, clinical director of the Institute for Sleep-Wake Disorders at Hackensack University, in Hackensack, N.J. “Clinicians often simply medicate their patients, but that is not the way to do it,” she says. “Pharmacology is only for the short term. They need to get at the depth of the problem.”

Previous research has reported a higher risk of heart attack among people with insomnia, but the new study is among the largest of its kind. It should be an eye-opener for cardiologists as well as for neurologists and doctors of all kinds, Zafarlotfi says, adding that future research is likely to strengthen the link between insomnia, heart disease, and related conditions such as stroke. “They have to ask their patients about sleep,” she says. “Sleep has to be a big part of working with patients.”