A report by Food Safety News earlier this week claims that the majority of the honey available in most grocery and department stores in the United States doesn’t legally meet the definition of “honey.” It’s been “ultra-filtered,” in order to produce a super-clear product that won’t crystallize. In the process, the honey loses any and all pollen, which is required to trace the honey to its origins in case of contamination and may have health benefits. Here’s how to find the good stuff.

This week’s report by Food Safety News sampled honey at grocery stores around the country, and found most of it has been filtered to the point where it has no pollen at all. The World Health Organization (WHO), the European Commission, and the US Food and Drug Administration (FDA) all state that in order for a product to be called honey, there has to be some pollen content. 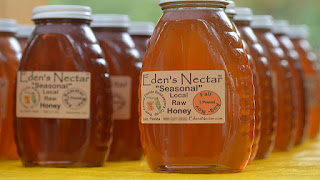 The industry group that represents honey manufacturers and importers, the National Honey Board, says this is misleading, and says they’re just doing what their customers want. Food Safety Watch disagrees, and says removing all of the pollen from honey removes any way to test for its geographic origins, doesn’t improve shelf-life, negates the possible health benefits of pollen, and is actually being used to cover up the import of unregulated and often contaminated honey from China through another country like India and finally into the US. In fact, in the EU, pollen must be listed as an ingredient on bottles of honey so consumers know what they’re getting. The FDA, on the other hand, hasn’t responded to the allegations, and doesn’t currently inspect honey for pollen content.

The best way to deal with the controversy is to avoid it altogether. Real honey, sometimes marketed as “raw honey,” is closer than you think. Natural food stores and farmers markets are far more likely to stock honey where the pollen has not been filtered out. They also tend to carry local honey, harvested by apiaries in your community that could use the support. Local Harvest, who we’ve mentioned can help you find a CSA, also can help you find an apiary or beekeeper in your area that sells their own honey. The closer to home you buy your honey, the better off you’ll be until the honey-laundering matter is settled.

One thought on “Buy Local Honey to Make Sure You’re Really Getting Honey, and Support Local Beekeepers”