Cooking food boosts the amount of energy your body can get from it — and hence the weight you gain by eating it.
That applies to both meat and potatoes, and likely had a profound effect on human evolution, says a study published this week in Proceedings of the National Academy of Sciences. 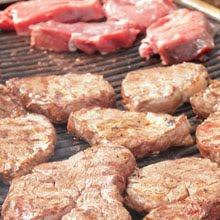 It also means that current food labels — which list the same number of calories for ingredients whether they are raw or cooked — are inaccurate, suggests Rachel Carmody, a researcher at Harvard University and lead author of the study.

“We see … increases in body mass, increases in brain size, some adaptations to energetically costly exercises such as long distance running,” she told CBC’s Quirks & Quarks in an interview set to air Saturday.

Interestingly, those changes came at a time when humans’ teeth and guts were getting smaller, providing further evidence that the human diet must have been getting richer in energy.

Some scientists hypothesized that the extra energy may have come from eating meat. Previous studies found that cooking starchy foods increased the amount of energy that could be extracted from them by the digestive system.

Carmody and her colleagues decided to test the effect of cooking on the amount of energy provided by meat.

Because the risk of food poisoning makes feeding humans raw meat as part of an experiment impossible, the researchers ran their experiment on mice, which have a similar digestive system to humans, and can eat both meat and vegetable matter.

They compared the weight of mice that were fed either raw or cooked meat. And they performed the same experiment with raw or cooked sweet potato.

“In both diets, the cooked food led to a higher body mass,” Carmody said.

The researchers suggest that is largely because cooking food makes it easier to digest.

“We can think of it as externalizing part of the digestive process,” Carmody said.

Finally, because cooking kills harmful food-borne microbes, the body doesn’t have to spend as much energy on the immune system to deal with those microbes.

Carmody said researchers still aren’t sure exactly when humans adopted cooking during their history. But she believes that whenever it happened, it had a significant impact on the amount of energy they could get from their food.