Did I mention that as well as being fat, I recently discovered I am also an addict?

Of course I never thought I had a problem – I was mostly eating within approved nutritional guidelines, after all. 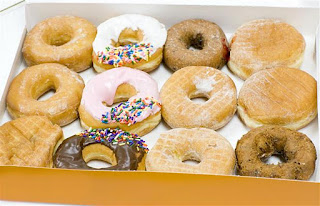 With hindsight, for me it was “having” to start my day with the divine dense European-style white rye bread made by a neighbourhood bakery.

For you, it might be that compulsory mid-afternoon bagel, the pizza slice three days a week after work, or even the portion-controlled, caloriecounted cupcake you allow yourself every night.

Whatever your particular poison, Drs. Richard and Rachael Heller, authors of The Carbohydrate Addicts Diet, believe that 75 per cent of overweight people are addicted to carbohydrates.

Just like any substance addiction — be it cigarettes, alcohol, cocaine, or that frosted doughnut with sprinkles — it comes with all the classic trappings: cravings, intrusive thoughts when you go too long without a fix, and withdrawal symptoms if you try to break the cycle.

But worse than the neurological effects is the fact that carbohydrate addiction can, and often does, create a condition that hijacks your metabolism, locking away what you eat as unburnable fat.

Too many carbs elevate blood sugar, and any excess to the body’s needs causes it to respond by releasing the hormone insulin, the primary driver of fat regulation. Insulin does damage control in the form of telling cells to get the excess sugar out of the blood stream. This is accomplished by the cells converting the sugar and storing it as fat for use later.

Only later never comes when a diet is high in carbs (even officially approved ones like whole grains): that fat will never need to be used as fuel, it stays stored. And those cells obligingly expand to accommodate it.

A diet high in carbohydrates can also mean that over time the cells become less receptive to the insulin, a condition called insulin resistance. The body is then forced to release more of it to control the blood sugar levels.

And so the vicious cycle of addiction begins: more insulin to be fed means the body craves more of what the hormone feeds on (sugars), and triggers more hunger for the food that produces that most efficiently – you guessed it, carbs. The fatter you get, the more you crave the food that very possibly made you fat in the first place.