Rather than declare failure when they aren’t as nimble on the tennis court or spry on the stairs as they used to be, older people should recognize that anything is still possible; they just may have to try a few different strategies, Langer says. 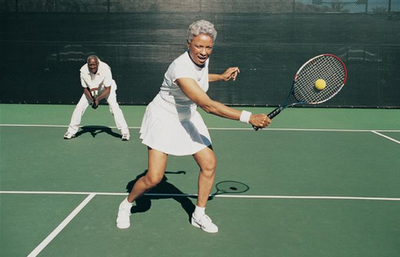 Those of us lucky enough to grow old must contend with the miserable stereotypes of what it’s like: the frailty, the forgetfulness, the early-bird specials.

But in aging, as in many things, attitude can make all the difference. Research has shown that how people feel inside, and their expectations of their capabilities, can have a greater impact on health, happiness and even longevity than the date on their birth certificates.

In her seminal “counterclockwise” study in 1979, Harvard University psychologist Ellen Langer brought men in their 70s and 80s to a weeklong retreat that was retrofitted, from the music to the newspapers, to look and feel like 1959. One group of men was told to reminisce about the era. The other group was told to let themselves be who they were 20 years earlier.

By the end of the experiment, both groups of men, who upon entering had been highly reliant on relatives to do things for them, were functioning independently, actively completing chores and showed significant improvements in hearing, memory, strength and intelligence tests. The group told to behave like they were 20 years younger also showed better dexterity, flexibility and looked younger, according to outside observers who judged photos of the participants taken before and after the retreat.

Expectation, not biology, leads many elderly people to set physical limits on themselves, Langer concluded; they assume they’ll fall apart, so they let it happen.

“What we want to do is not get older people to think of themselves as young, but to change their mindsets about what it means to be older,” Langer said. And being older doesn’t have to equal decay.

Take memory. Thirty-yearolds forget lots of things, but they don’t blame dementia. Older people jump to the conclusion that memory failures are part of their inevitable decline, when in fact, it could be that their values change about what’s meaningful enough to remember, Langer said.

Rather than declare failure when they aren’t as nimble on the tennis court or spry on the stairs as they used to be, older people should recognize that anything is still possible; they just may have to try a few different strategies, Langer says.

Internalizing negative stereotypes about aging can have dire health consequences, even among the young, some studies suggest.

Men and women older than 50 with more positive perceptions of aging lived 7.6 years longer than those with negative perceptions, according to a 2002 study led by Yale University epidemiology and psychology professor Becca Levy. Healthy people younger than 50 who held negative attitudes toward the elderly were more likely to experience a cardiovascular disorder over the next four decades than their peers who had more positive view of the elderly, a 2006 study by Levy found.

Other studies that look at age identity — also known as subjective, or felt, age — have found that feeling younger than you really are is linked to better health, life satisfaction and cognitive abilities.

It’s not clear what comes first: If identifying as younger makes you vital and sharp, or if people who feel vital and sharp associate that with feeling younger, said Markus Schafer, assistant professor of sociology at the University of Toronto, who last year published a study on age identity while a graduate student at Purdue University.

His study, in which people on average felt 12 years younger than their actual age, found subjective age was more important than chronological age in predicting performance on memorization and other mental tasks 10 years later. The cognitive benefits of feeling young were slightly more pronounced among women, he said, perhaps because of greater pressure on women to maintain youthfulness.

Regardless of what causes the correlation, he said, there are benefits to staying engaged.

“Learning new things, reading in a new area, at least trying to become connected with new technologies and platforms: Those are ways people can feel connected with the ebb and flow of the world,” Schafer said.