Does it really fight cancer? Lower cholesterol? We filter the research to find out which health claims actually hold water.

The way scientific studies and health gurus alike have touted the perks of tea over the past few years, you’d think the stuff was some kind of all-powerful magical elixir. Improving heart health, reducing cancer risk, warding off dementia and diabetes—there’s barely a health benefit that hasn’t been credited to tea. It’s true that the brew has disease-fighting antioxidants, and, as far as anyone can tell, should be great for us. “The science is certainly promising,” says David L. Katz, MD, director of Yale University’s Prevention Research Center. “But the hype goes beyond it and tends to make promises which the science can’t yet deliver.” (No, tea probably will not cure depression, eliminate allergies, or boost your fertility!) We talked to the experts and weighed the studies to separate the truth from the hype.
Why tea is so hot
First, a definition: When scientists talk about tea, they mean black, green, white, or oolong teas—all of which are made from the leaves of the Camellia sinensis plant. Herbal brews, like chamomile and peppermint, are not technically considered tea; they’re infusions of other plants with different nutritional characteristics. If you’re not sure what kind you’re drinking, check the ingredients for the word “tea.” 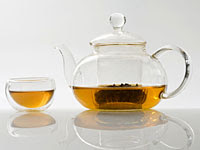 are prepared and how mature they are, which affects both flavor and nutritional content. Black tea is made from leaves that have been wilted (dried out) and then fully oxidized (meaning that chemicals in the leaves are modified through exposure to air). Green tea’s leaves are wilted but not oxidized. Oolong tea is wilted and then only partially oxidized, and white tea is not wilted or oxidized at all.

All four types are high in polyphenols, a type of antioxidant that seems to protect cells from the DNA damage that can cause cancer and other diseases. It’s the polyphenols that have made tea the star of so many studies, as researchers try to figure out whether all that chemical potential translates into real disease-fighting punch. Most research has focused on black tea, which is what about 75% of the world drinks, and green tea, the most commonly consumed variety in China and Japan. Green tea contains an especially high amount of antioxidants—in particular, a type of polyphenol called a catechin, the most active and abundant of which is epigallocatechin-3-gallate (EGCG). That’s why there are five times more studies on green than black tea each year—and likely why you’re always hearing about the power of the green stuff, says Diane L. McKay, PhD, assistant professor of nutrition at the Tufts University Friedman School of Nutrition Science and Policy.

Boiling down the hype

The most promising claims about tea drinking include these perks:

• Cancer prevention: A 2009 review of 51 green tea studies found that sipping three to five cups a day may lower the risks of ovarian, colorectal, lung, and prostate cancers, but not breast or other cancers, says lead author Katja Boehm, research fellow at the Center of Integrative Medicine at the University of Witten/Herdecke in Germany. As for black tea, the National Institutes of Health (NIH) deems it “possibly effective” for reducing the risk of ovarian cancer, and “possibly ineffective” for lowering the risk of stomach and colorectal cancers.

• Brain benefits: Downing from one to four cups of black or green tea a day has been linked with a lower risk of Parkinson’s disease, according to the NIH.

• Heart help: “Drinking tea may be helpful in preventing or delaying certain risk factors of cardiovascular disease, and lowering LDL (bad) cholesterol and triglycerides,” says McKay. One Japanese study found that adults who drank five or more cups of green tea per day had a 26% reduction in death from heart attack or stroke compared with those who had one cup or less; the effect was greater in women than in men.

More research needs to be done on other potential benefits. One small study suggested that the catechins and caffeine in green tea may give dieters a small metabolic boost that could amount to burning a few dozen extra calories per day. There’s also a slim file on how drinking tea may help ward off osteoporosis and reduce the incidence of cavities, due to the fluoride it contains. And EGCG, that green-tea antioxidant, has been found to increase the number of important immune-boosting cells (called regulatory T-cells)—but only in one animal study.

Smart sips
All this sounds pretty compelling. So why aren’t major health organizations advising us to drink tea like crazy? It’s a matter of needing more hard-core evidence. “There are pearls of real promise here, but they have yet to be strung,” Dr. Katz says. “We don’have clinical trials in human patients showing that adding tea to one’s routine changes health outcomes for the better.” The vast majority of the research conducted has been observational, meaning scientists can’t know if the medical boosts seen in tea drinkers are definitely a result of that habit, or some other factor that makes these people healthier. And many of the studies that have looked at specific compounds in tea have been conducted in labs or on animals, not on people. “These chemicals act as antioxidants in a test tube, but they may not do the same in your body,” explains Emily Ho, PhD, associate professor in the department of nutrition and exercise science at the School of Biological and Population Health Sciences at Oregon State University. “You have to take the claims with a grain of salt.”

That said, experts agree that a daily cuppa, or five, won’t hurt you, and may well help fight disease. (If you’re trying to limit your caffeine intake, go for decaf—it has antioxidants too, though fewer than the caffeinated kind.) “Tea is probably better than a lot of other beverages,” says Lona Sandon, RD, assistant professor in the department of clinical nutrition at UT South-western Medical Center and a spokesperson for the American Dietetic Association. “Just make sure you’ve got other healthy lifestyle habits—you can’t count on tea alone to prevent cancer.”