(Reuters Health) – If you think you don’t have time to take the stairs, you may be out of an excuse, according to a study published Monday. 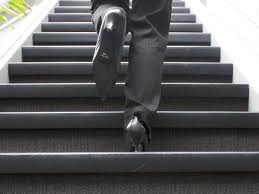 Researchers at one Canadian hospital found that when they had doctors take the stairs instead of the elevator, it saved each an average of 15 minutes out of the workday.

The stairs were more efficient, it seemed, since there was no wait-time for a lift, according to findings reported in the Canadian Medical Association Journal.

In general, experts recommend that people find ways to add “incidental” exercise to their daily lives. That includes small steps like parking farther away from your destination and bypassing the elevator in favor of the stairs.

But many people habitually head straight for the elevator, noted Dr. Thomas Wilson, the senior researcher on the new study. And the assumption that it saves time may be one reason.

So Wilson and his colleagues at the Royal University Hospital in Saskatoon, Saskatchewan, put that idea to the test by recruiting four doctors at their center.

They measured the time it took each doctor to make 14 different trips on the hospital stairs — walking, not running — and to make those same trips via elevator (at different points of the weekday and weekend). The longest journey ran from the ground floor to the sixth floor.

It turned out that the doctors were much quicker than the elevators.

On average, it took them 13 seconds to climb one floor, whereas the elevator took about 37 seconds. All 14 stairway trips took a grand total of 10 minutes, on average. The time by elevator averaged 20 to 25 minutes.

Wilson said that the findings are “probably generalizable” to other hospitals of a similar size.

Of course, not everyone works in a hospital, he pointed out.

If you’re an office worker, he said, you probably make fewer trips between floors in a day — and your wait time for the elevator may be a lot shorter.

So using the stairs may not grant you an extra 15 minutes in your day.

But choosing the stairs when you can is still a good move, according to Wilson.

“People should seriously consider taking the stairs,” he said. “I think we’re all in the habit of just punching the elevator button.”

Naturally, if you work on an upper floor of a high-rise, climbing to the office may not be an option, Wilson noted. But for most healthy people, he said, climbing a few flights is within reason.

The doctors in this study ranged in age from 26 to 67.

Dr. Philippe Meyer, a cardiologist at the University Hospital of Geneva in Switzerland, agreed that time-saving might motivate workers who have to travel up and down a few flights of stairs.

“Taking stairs may save time if you are in a three- to four-story building, but certainly not if you work at the Empire State Building,” Meyer said in an email.

As for the health effects of stair-climbing, not much research has been done. But in a study published last year, Meyer found that encouraging sedentary workers at his hospital to take the stairs had some tangible benefits.

After 12 weeks, those workers were climbing an average of almost 21 flights per day, versus 4.5 before the stair-climbing campaign.

But that did require climbing about 20 stories in a day, Meyer pointed out — which is more than most of us would do in our normal daily routine.

So even if you opt for the stairs when you get to the office, you’ll probably need to find other ways to exercise as well.