The Alzheimer Society of Canada is warning that too many seniors are dismissing the early signs of dementia as just “normal aging,” and waiting too long to ask their doctor about their symptoms. 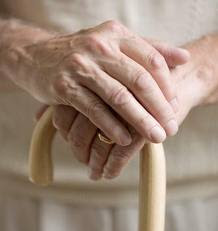 The society recently completed a survey of nearly 1,000 caregivers of Alzheimer’s patients, and found that about half said their loved ones waited a year or longer after their symptoms began before going to see a doctor. Almost 16 per cent waited more than two years, the survey found.

Those delays can hold up care and prevent people from accessing the medications that can help slow the disease in some patients, the Alzheimer Society says.

The online survey found that the most-cited reason for delaying diagnosis was the belief that Alzheimer’s disease symptoms, such as memory problems and confusion, were normal or would eventually go away.

Almost 40 per cent of respondents said they didn’t take the symptoms more seriously because many of the symptoms seemed to come and go.

The most common early symptoms cited by survey respondents were:

Elizabeth Allen, who was diagnosed with Alzheimer’s disease in 2006, wants patients who are noticing memory problems to seek help quickly, pointing out that the process itself of getting a diagnosis can eat up a lot of valuable time.

Allen says when she realized she couldn’t keep track of instructions when following a recipe, she went to her family doctor first, who first checked for hormone and thyroid problems.

“We went through many things before she finally sent me to a neurologist,” Allen told CTV’s Canada AM Wednesday.

Alzheimer Society CEO Naguib Gouda says many of those who wait to ask their doctor about their symptoms regret that decision later.

“We found that once people understood the benefits (of early diagnosis), 75 per cent said they wished they had gone to see their doctors sooner,” Gouda told Canada AM.

While there is no cure for Alzheimer’s disease, there are medications that can work on some patients – but the drugs are typically most effective in the earliest stages of the illness.

“The earlier you have access to the drugs that are available… the more likely these drugs are to help manage your symptoms and potentially even slow down the progression of the disease,” says Gouda.

Even if the medications aren’t effective, there are other benefits of getting a diagnosis early in the disease’s progression. A diagnosis gives patients time to alert their family and arrange caregiving. It also gives them time arrange their finances and legal affairs, before memory problems make such tasks too difficult.

The third benefit is simply the peace of mind that can come from getting a firm diagnosis. Then, if it is Alzheimer’s, patients can learn more about the disease and what to expect from it.

“It’s really about not suffering from the uncertainty of not knowing. And it’s about developing coping skills,” says Gouda.

Linda Finkbeiner took her husband, Jim, to the doctor six months after she began noticing he was getting more forgetful and less interested in certain activities.

She believes an early diagnosis allowed Jim to find a specialist, begin taking medication and tell his family about the disease.

“That early diagnosis gave me quality time with my husband,” she told CTV News.

Alzheimer’s disease will affect 1.1 million Canadians in the next 25 years.

The Alzheimer Society encourages Canadians to visit its Let’s face it! campaign site to learn more about the warning signs of dementia and download a Preparing for your doctor’s visit checklist.