(Reuters Health) – A new report links remnants of a once-common pesticide to lung infections and wheezing in kids exposed to the chemical before birth. 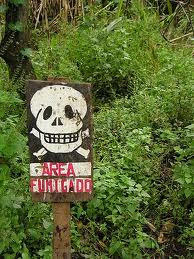 Known as DDE, the compound is a broken-down form of the harmful pesticide DDT and is found in many places around the world. It is absorbed into a person’s body when they eat contaminated food or breathe contaminated dust.

The study, published in the European Respiratory Journal, shows babies exposed to high levels of DDE in the womb grew up to have higher rates of pneumonia and bronchitis.

“We found that the risk of infections and wheeze increased with increasing DDE exposure,” Martine Vrijheid, associate professor at the Centre for Research in Environmental Epidemiology in Spain, told Reuters Health by email.

Vrijheid and her colleagues took blood samples from a large group of pregnant women in Spain, measuring the women’s exposure to three different pollutants.

Later, when the babies were about a year old, the researchers asked the mothers whether their toddlers had had breathing trouble or lung infections.

About 35 percent of the 1,342 children developed a lung infection within their first year, the team found, and the risk rose in tandem with the DDE levels in the mother’s blood.

Vrijheid estimates that with undetectable or very low levels of DDE, only 30 percent of the children would have developed infections.

The new study is the largest of its kind, according to the researcher. Past work has yielded mixed results, and until now has failed to show a significant association between DDE exposure and lung infections within a child’s first year of life.

DDT was once widely used to kill mosquitoes and prevent malaria outbreaks, but its use was called into question in the 1960s and was banned in the U.S. in 1973. But it and its breakdown products can last in the environment for hundreds of years.

People exposed to large amounts of DDT may experience tremors, seizures, sweating, headaches and vomiting, according to the Centers for Disease Control and Prevention. But those symptoms disappear when the person is no longer exposed to the pesticide.

Barbara Cohn, the director of Child Health and Development Studies at the Public Health Institute in California, told Reuters Health that DDT and its remains have been hard to study because of the time needed for it to show up in people.

“People thought it was a miracle compound,” said Cohn. “Nobody really knew what might be happening.”

DDT is still used in some parts of the world, because it is considered the best way to kill malaria-carrying mosquitoes, said Vrijheid.

In 2006, the World Health Organization sanctioned an altered technique for using DDT, which involves spraying the pesticide on the inside of a building to kill mosquitoes that land on its walls and other surfaces.

Vrijheid told Reuters Health that it’s hard to avoid chemicals like DDT and DDE, which are stored in fat and found in higher concentrations at the top of the food chain.