Eat your way to more energy, better skin, and a stronger immune system this winter.

The latest science suggests that it’s not just the chilly, dark days of winter that make us feel (and look) so miserable, it’s our diet. Eat right, and avoid the beauty and health hazards of the season. Here, the latest strategies:

Try extra helpings of Swiss chard, and enjoy your egg yolks. Both contain biotin, which promotes production of fatty acids — a must-have for smooth skin. As a dietitian at Foodtrainers in New York City, Lauren Slayton tells her clients: “An egg a day keeps dry skin away.”

Dr. Barbara Reed, a dermatologist in Denver, sheds light on goggle face — those ridiculous tan lines you get around the eyes after hitting the slopes: Turns out, ultraviolet radiation increases 2 percent for every 1,000-foot rise in elevation, so ski and board with sunscreen. Perricone believes you can build on that protection every day with two to three cups of green tea, a square of dark chocolate (at least 70 percent cocoa), and foods containing lycopene — like tomatoes, pink grapefruit, and watermelon. Studies out of the University of Düsseldorf in Germany report that these foods prevent and slightly reduce damage from sun exposure. 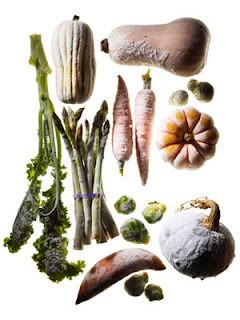 We know that ample vitamin D is essential for strong bones; it helps with absorption of calcium and phosphorous. But now science is starting to confirm its link to your mood: A University of Queensland, Australia, review study reports that vitamin D affects dopamine, a brain chemical linked with reward recognition. Besides taking supplements (about 1,000 IU daily), look for vitamin-D-enriched foods, such as fortified milk, orange juice, yogurt, and, more recently, UVB -enhanced mushrooms, a new innovation.

Finally, researchers are exploring folate, a vitamin found in spinach, asparagus, black-eyed peas, beans, and fortified cereals. Certain forms of folate supplements (such as the “prescription food” Deplin) may cross the blood-brain barrier, Mischoulon says, providing a boost to antidepressants.

It’s dark. It’s cold. It’s holiday-shopping crunch time. Of course your energy is sapped! Spot-treat with gum. Chewing enhances blood flow to the brain, perking it up, almost like caffeine but without the crash. Maximize the effect with minty flavors — or reach for a minty drink. According to a study out of Wheeling Jesuit University in West Virginia, subjects drinking 50 milliliters of peppermint-infused water rated their performance on a treadmill session higher — and experienced a mood boost — than those on a placebo. You may even actually perform better if you inhale it: The scent of mint seems to change brain activity, preventing a plunge in arousal levels that would typically occur after a stress test.

Germs spread with abandon in winter because we’re cooped up indoors. So Bauer suggests eating at least 75 milligrams of vitamin C (from papaya, red bell peppers, oranges, Brussels sprouts, cantaloupe), which stimulates the growth and activity of infection-fighting white blood cells. To bolster your immune system further, heap on beta carotene (from leafy greens such as spinach, romaine lettuce, broccoli, and kale, and orange-colored produce such as sweet potatoes, carrots, and winter squash). It helps to play offense, too: Onions are loaded with quercetin, an antioxidant that slows viral activity and replication.

And what about chicken soup? It appears that Mom’s remedy keeps white blood cells, which can cause inflammation, from migrating into the nose and throat and causing congestion. It’s the nutrients in the colorful mix of veggies — in concert with the chicken and hot liquid — that does the trick. The memories it conjures of cozy winters gone by can’t hurt, either.