LESLIE BECK
Globe and Mail
Tuesday, Mar. 06, 2012
It’s a food that’s long been known to keep your heart and blood vessels healthy. Eating fish, especially oily fish rich in omega-3 fats, has been linked with a lower risk of stroke and death from heart disease.
According to a new study, the benefits of eating fish go beyond heart health: A higher intake of omega-3 fatty acids can slow brain aging and improve memory and thinking skills. 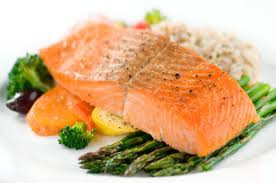 Previous studies have reported a lower risk for dementia with higher fatty fish intakes. In a study of 900 men and women, average age 76, those with higher blood levels of an omega-3 fatty acid called DHA (docosahexaenoic acid) were 37 per cent less likely to develop Alzheimer’s disease than their peers with lower DHA levels. (Fish contains two omega-3 fatty acids: DHA and EPA or eicosapentaenoic acid.) So far, however, no study has examined the association between blood levels of omega-3 fats and early brain structure changes related to dementia.
For the current study, published in the journal Neurology, researchers from the University of California at Los Angeles had 1,575 people, average age 67, who were free of dementia undergo MRI brain scans.
They were also given tests that measured cognitive function and the level of omega-3 fatty acids in their red blood cells. Omega-3 fatty acids in red blood cells reflect dietary intake over the past three months.
People whose red blood cell DHA levels were among the bottom 25 per cent of the participants had lower brain volumes compared to people who had higher DHA levels. The MRI finding of smaller brain volume represented a change equivalent to roughly two years of brain aging.
Participants with levels of omega-3 fatty acids in the bottom 25 per cent also scored lower on tests of visual memory, problem solving, multitasking and abstract thinking.
Omega-3 fatty acids are a large component of brain cells, where they keep the lining of brain cells flexible so memory messages can pass easily between cells. They’re also thought to prevent the buildup of a protein called beta amyloid, which can interfere with communication between brain cells.
DHA and EPA help keep blood vessels healthy by lowering blood pressure and triglycerides, reducing inflammation and inhibiting blood clot formation. Damage to blood vessels in the brain is related to a higher risk of dementia.
There’s no evidence that omega-3 fatty acid supplements improve cognitive function in patients with mild to moderate Alzheimer’s disease. One study, however, did find DHA and EPA supplementation to slow cognitive decline in people with very mild Alzheimer’s. It’s thought that omega-3 fatty acids from fish oil may protect the brain during the earliest stages of cognitive decline.
Omega-3 fats may slow the aging process in other ways too. Higher intakes of omega-3s may keep special sequences of DNA , called telomeres, in good form. Telomeres cap the ends of chromosomes, keeping a cell’s genetic material intact.
When cells divide, telomeres get progressively shorter until, eventually, the cell dies. Telomere shortening has been linked to the aging process, cancer and a higher risk of dying.
A 2010 study found that men with the lowest blood levels of DHA and EPA experienced the most rapid rate of telomere shortening over five years, whereas those with the highest levels had the slowest rate of telomere shortening.
The main source of DHA and EPA is fatty fish. Excellent sources – which are also low in mercury – include salmon, herring, anchovies, mackerel, sablefish, whitefish and trout.
Foods such as flaxseed, chia seeds and walnuts contain an omega-3 fat called ALA (alpha linolenic acid). However only a very small amount of ALA is converted to DHA and EPA in the body, a process which becomes even less efficient with age.
There is no official recommended intake for omega-3 fatty acids. Many experts advise 500 to 1000 milligrams of DHA and EPA (combined) a day for cardiac health. Since omega-3 fats store in the body, you don’t have to each fish every day. A weekly six-ounce serving of Atlantic salmon, for instance, contains 3,650 milligrams of DHA and EPA which will give you 521 mg a day. (3650/7 days = 521 mg a day) If you don’t like fish, consider taking a fish oil supplement to get omega-3 fatty acids. Fish oil capsules vary in the amount of DHA and EPA they contain. Most capsules provide 300, 500 or 600 milligrams of omega-3 fatty acids. Many liquid fish oils contain 1,300 milligrams of DHA and EPA per teaspoon.
Note though, fish liver oil capsules are usually not a good source of DHA and EPA. Long-term intake of fish liver oil may lead to toxicity due to high amounts of vitamin A.
If you’re a vegetarian, look for a DHA supplement derived from algae.
Leslie Beck, a Toronto-based dietitian at the Medcan Clinic, is on CTV’s Canada AM every Wednesday. Her website is lesliebeck.com.
source: theglobeandmail.com