For the study, Harvard researchers delved into the diets of more than 120,000 men and women who are taking part in the long-running Health Professionals Follow-up Study and the Nurses’ Health Study.

Every four years, people in the study were asked detailed questions about their eating habits. They were also asked about other health determinants like smoking and drinking, exercise, and body weight.

During the next 20 years, researchers found that people who ate the most red meat were more likely to die, and die of cancer or heart disease, compared to people who reported eating the fewest daily servings of beef, pork, and lamb. 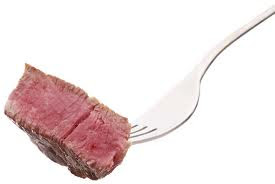 Processed meats appear to be even more hazardous. A single daily serving of processed meats like bacon (two slices), sausage, or hot dogs (1 piece), raised the risk of dying of heart disease by 21% and dying of cancer by 16%.

“Processed red meat is definitely more harmful than fresh or unprocessed red meat,” says researcher An Pan, PhD, a research fellow in the department of nutrition at the Harvard School of Public Health, in Boston.

Go Nuts (or Fish, or Chicken)

Replacing red meat with leaner proteins like fish, chicken, nuts, low-fat dairy, whole grains, or beans may lower the risk of early death by 7% to 19%, the study shows.

“This is a call for a more varied diet that substitutes other foods for red meats, especially nuts,” says Nestle, who was not involved in the research.

“These lifestyle and diet changes really do make a difference,” says Dean Ornish, MD, founder and president of the nonprofit Preventive Medicine Research Institute in Sausalito, Calif. He is also clinical professor of medicine at the University of California, San Francisco.

“I think everybody would be better off if they consumed a plant-based diet. But even modest changes — substituting chicken for beef, for example, or fish for chicken — also play an important role in reducing risk,” says Ornish, who wrote a commentary on the study but was not involved in the research.

The study and commentary are published in the Archives of Internal Medicine.

Beef producers point out that this is a specific type of research called an observational study, which can’t prove cause and effect. They say other studies have shown that eating lean beef can be part of a healthful diet.

“If there is one thing scientists agree on, it is that responsible dietary advice must be drawn from a look at the entire body of evidence, including rigorous, gold-standard randomized control trials when they are available,” Shalene McNeill, PhD, RD, executive director of Human Nutrition Research for the National Cattlemen’s Beef Association, says in a written statement.

“In the case of beef, there are several randomized control trials which have convincingly shown that lean beef, when included as part of a healthy, balanced diet, improves heart health by lowering cholesterol,” she says.

“Most recently, the BOLD (Beef in an Optimal Lean Diet) study showed that eating lean beef every day, as part of a heart-healthy diet, could reduce [unhealthy] LDLcholesterol…” McNeill says.

Why Worry About Red Meat?

Red meat is high in protein, which helps maintain muscle. It’s also high in heme iron, which can be helpful for those who suffer from anemia, or iron deficiency.

But along with its virtues, red meat also is high in saturated fat and cholesterol, for example, which are thought to contribute to heart disease and cancer.

Processed meats like bacon and salami are often high in sodium, which may contribute to high blood pressure. They also contain preservatives like nitrites, which have been linked to cancer, such as pancreatic, kidney, and bladder cancers.

And cooking meat, including red meat and chicken, at high temperatures, by grilling or broiling it, for example, is known to generate chemicals linked to cancer.

Still, the study does not prove that red meat is directly harmful to health. It could be that people who eat lots of red meat are just also more likely to engage in other behaviors that may shorten their lives.

Indeed, researchers note that people in the study who ate a lot of red meat were less likely to exercise and were more likely to smoke, drink alcohol, and beoverweight than people who didn’t eat as much red meat.

Knowing that, however, researchers were able to adjust their data to try to account for the influence of those other unhealthy behaviors.

The study echoes previous research which has also linked diets high in red meat to a shorter life span.

In 2009, a study by the National Cancer Institute found that people who ate the equivalent of a quarter-pound burger or small steak each day had about a 30% greater risk of dying over 10 years than people who only ate red meat occasionally.

High red meat consumption has also been linked to obesity and type 2 diabetes.

“The notion that eating meat might be bad for us is tough to swallow for a generation that has drunk deep of the ‘low carb’ Kool-Aid!” David L. Katz, MD, MPH, founder and director of Yale University’s Prevention Research Center in New Haven, Conn., says in an email to WebMD.

But Katz says the evidence clearly shows that more is not better when it comes to red meat.