TUESDAY, March 13 (HealthDay News) — A nightly breathing treatment may not only help people with obstructive sleep apnea sleep better, it might also lower their risk of heart failure, a new study finds.

Obstructive sleep apnea occurs when breathing is interrupted throughout nighttime sleep. With the new study, a team of British researchers believe their findings could have a significant impact on the estimated 18 million Americans with some form of the condition.

“Sleep apnea has been frequently associated with poorly controlled blood pressure, heart failure and fatigue,” noted one expert, Dr. Justine Lachman, director of the Congestive Heart Failure Program at Winthrop-University Hospital in Mineola, N.Y. Lachman, who was not involved in the new study, noted that “the stress of repeatedly waking up at night due to a lack of oxygen results in the heart needing to work harder. This results in abnormal thickening and relaxation of the heart’s muscular tissue.”

The new study does suggest that moderate-to-severe sleep apnea can reshape the heart, increasing its size, thickening its walls and reducing its ability to pump blood throughout the body. 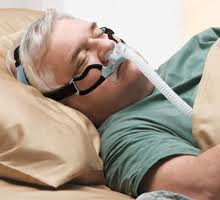 However, the study also found that at least six months of continuous positive airway pressure (CPAP) treatment can help restore the heart’s size and function to nearly normal levels. CPAP uses a mask to deliver pressurized air into the airway of sleepers.

“To the best of our knowledge, this is the first study to provide a comprehensive assessment of left ventricular [heart] structural and functional parameters using advanced echocardiograms in otherwise healthy apnea patients,” said Dr. Gregory Lip, a researcher at the University of Birmingham Center for Cardiovascular Sciences, in England, in a journal news release.

According to Lip, the study shows that sleep apnea “could be crucial” to the development of a certain type of heart dysfunction “that can lead to heart failure and increased mortality if left untreated.”

The researchers used two- and three-dimensional echocardiograms and Doppler imaging of heart muscle tissue to examine 40 people with moderate-to-severe obstructive sleep apnea, 40 people with high blood pressure and 40 people with no health concerns.

The study, published March 13 in Circulation: Heart Failure, revealed the patients with obstructive sleep apnea had abnormally shaped hearts. The hearts of those with sleep apnea also functioned at the same level as those of patients with chronic high blood pressure.

Patients with sleep apnea “may have cardiac abnormalities that often are undetected, but will improve with CPAP,” Lip reasoned. “Patients also need to understand that obstructive sleep apnea is not a benign disorder, but that their risk of heart problems can be easily treated with CPAP.”

For her part, Lachman said the findings came as little surprise.

“I have found that treatment of patients’ sleep apnea has made dramatic changes in not only their quality-of-life, but also in the ability to treat associated or piggybacked conditions, such as high blood pressure and heart failure,” she said. “Often, treatment of sleep apnea can also reduce the number of medications patients are required to take. So, it would make sense that treating sleep-disordered breathing would prevent the cascade of problems that results in serious heart problems.”

The study’s authors agreed that doctors should talk to their patients with high blood pressure or abnormal echocardiograms about whether they snore and other signs of sleep apnea.

They also noted that the study, which wasn’t randomized or blinded, also showed people with sleep apnea tended to be overweight or obese. The researchers said more research is needed to clarify their findings.

Another expert agreed that more study may be needed.

“The results are complicated by the fact the patients with sleep apnea had higher blood pressures than the normal control group, and the fall in blood pressure associated with CPAP therapy could be a confounding variable,” said Dr. Neil Coplan, director of the division of clinical cardiology at Lenox Hill Hospital in New York City.

“The study is thought provoking,” he said, “but there is need for a much larger study with long-term follow up to assess the clinical significance of the changes seen with therapy.”