March 14, 2012 — Being sleep deprived may make you eat more than usual, according to a new study.

When researchers compared people allowed to sleep as much as they wished with those who slept just two-thirds of their normal time, they found that sleep deprivation was linked to eating more calories. 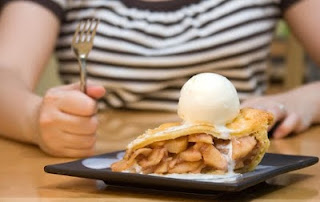 “When people were sleep deprived, they ate an extra 549 calories per day,” says researcher Andrew Calvin, MD, MPH, a fellow in cardiovascular disease and assistant professor of medicine at Mayo Clinic, Rochester.

Over a week’s time, that could add up to a pound of weight gain. However, Calvin says, “we don’t know how long this effect lasts.” His study lasted eight days.

He will present the findings today at the American Heart Association’s Epidemiology and Prevention/Nutrition, Physical Activity, and Metabolism 2012 Scientific Sessions in San Diego.

The research echoes previous studies finding that lack of sleep is linked with weight gain and obesity, both in adults and children.

The study was funded by the National Institutes of Health, the Minnesota Obesity Center, and the Mayo Clinic.

Calvin and his team studied 17 men and women, ages 18 to 40. First, they ruled out sleep disorders by having participants spend a night in a sleep lab.

Next, the participants wore a wristwatch-sized device called an actigraph to track their sleep for three nights at home. The researchers evaluated how much time each person normally slept.

Next was the eight-day study in the sleep lab. Men and women were randomly assigned to sleep as much as they wanted or to sleep only two-thirds of their normal sleep time.

During the at-home phase, the average amount of sleep was 6.5 hours.

During the sleep lab phase, the sleep-deprived group averaged 5.2 hours a night. The other group continued to sleep about 6.5 hours nightly.

The National Sleep Foundation suggests adults get seven to nine hours of sleep a night.

While the sleep-deprived group ate the extra 549 calories daily, the comparison group actually ate about 143 fewer calories daily than usual.

The researchers tracked how active each group was. “A lot of people assume if they are awake longer, they will move more and burn more calories,” Calvin tells WebMD.

Not so, he found. He didn’t find much difference in activity expenditure between the sleep-deprived group and the group that slept as much as they wanted.

Calvin expected the opposite. “We thought sleep deprivation would reduce leptin and increase ghrelin,” he says. That would make people feel hungrier and less full. However, the increase and decrease were slight, he says.

It appears the hormone changes may be a consequence, rather than a cause, of eating extra calories, he says.

The link between sleep deprivation and extra calories may be more complicated than scientists thought, he says.

Until more research is in, Calvin says, “If you are looking to maintain a healthy weight or lose weight, I think getting adequate sleep may be very important.”

The study is ”consistent with previous findings,” says Eve Van Cauter, PhD, a professor of medicine at the University of Chicago. She has also researched the topic.

“The size of the increase in calorie intake is enormous,” she says, referring to the 549 additional calories.

She is not surprised that the leptin levels went up and the ghrelin went down in the sleep-deprived group.

“The increase in leptin is due to the weight they gained during the week,” she says. “When you eat 549 extra calories a day for eight days, there is no way their weight would have been stable.”

“When you put on more weight, that additional weight comes in the form of fat,” she says. “Leptin levels are proportionate to fat.”

Other studies, she says, have not allowed people to eat as much as they wanted, so that could explain the differences.

These findings were presented at a medical conference. They should be considered preliminary as they have not yet undergone the “peer review” process, in which outside experts scrutinize the data prior to publication in a medical journal.