WEDNESDAY, March 14, 2012 (Health.com) — The millions of people whose genes make them prone to obesity aren’t at the mercy of nature. How they choose to spend their free time can make a big difference in their waistline, according to new research presented today at an American Heart Association (AHA) meeting in San Diego.

Watching TV for two hours each day increases the effect of certain obesity-related genes by as much as 25%, the researchers estimate. If, on the other hand, people with a strong genetic predisposition to obesity spend one hour each day walking briskly or engaging in comparable exercise, they can halve the genes’ effect.

“In terms of evolution, this makes sense,” says Roxanne Sukol, MD, a preventive medicine specialist at the Cleveland Clinic, who was not involved in the study. “We didn’t evolve to sit still for hours a day.”

To explore the interaction between behavior and genes, Harvard researchers analyzed data on more than 12,000 men and women participating in two large studies of health professionals.

The researchers measured the participants’ genetic risk by identifying how many of the 32 known variants of the so-called obesity gene each person had. (The gene is officially known as the fat mass and obesity associated, or FTO, gene.) Roughly half of the general population has some genetic risk for obesity, says lead author Qibin Qi, Ph.D., a research fellow in nutrition at the Harvard School of Public Health, in Boston.

At the same time, Qi and his colleagues looked at how many hours per week each of the participants spent in front of the TV, as well as how much time they devoted to physical activity. Two years into the study, the researchers also recorded the participants’ body mass index (BMI), a ratio of height to weight used to measure body fat.

Each additional obesity-related gene variant was associated with a 0.13-unit increase in BMI, the researchers found. To put it another way, the average person with 7 to 8 variants can expect to have a BMI roughly one unit higher than it would be without the variants. (One BMI unit is equivalent to about six pounds on a 5-foot, 6-inch woman.) 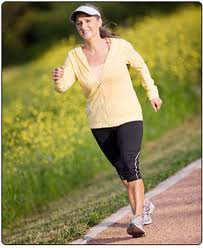 The influence of the gene variants, however, appeared to be strongest in people who watched the most TV. The variants’ effect on BMI was about four times greater in people who spent 40 hours or more per week in front of the TV than it was in those who watched an hour per week or less.

By the same token, weakening the genes’ effect was as simple as switching off the television and going for a brisk walk. The average difference in BMI between a person with the highest genetic obesity risk and a person of identical height with the lowest risk would be cut in half if the high-risk person were to walk for an hour each day, Qi and his colleagues estimate.

The main problem with TV watching is that it tends to involve so much sitting, Qi says. As long as they keep moving while they watch, people don’t necessarily need to miss their favorite shows.

“Rather than just sitting there, I have a better idea: When they watch, they should exercise,” he says. “There’s nothing wrong with TV per se, but TV watching may be indicative of a sedentary lifestyle.”

Sukol often recommends pedometers to patients who are trying to be more active. The devices enable patients to track their progress by measuring the number of steps they take each day, and they also motivate people to keep walking.

“Human beings are designed to move,” Sukol says. “If we’re not moving, we put ourselves at risk.”

Qi and his colleagues presented their findings today at the AHA’s annual meeting on nutrition, physical activity, and metabolism. Unlike the research published in medical journals, the study has not been thoroughly reviewed by other experts in the field.