(Reuters Health) – Women who are fed up with their jobs may be more likely to turn to food for comfort in times of stress, a new study suggests.

The study, which followed 230 Finnish women, found that those who reported work burnout were also more likely to have a habit of emotional” eating — that is, eating when you’re stressed, anxious or down, rather than just hungry.

What’s more, they were more prone to uncontrolled” eating, the feeling that you’re always hungry or can’t stop eating until all the food’s gone.

The findings, reported in the American Journal of Clinical Nutrition, are not surprising, said Sherry Pagoto, an associate professor of medicine at the University of Massachusetts Medical School and a clinician at the university’s Weight Center.

It’s all connected to stress,” said Pagoto, who was not involved in the study.

Work permeates our lives,” she noted in an interview. And when people have a source of chronic stress, it can sometimes lead to emotional eating and problems with weight control. 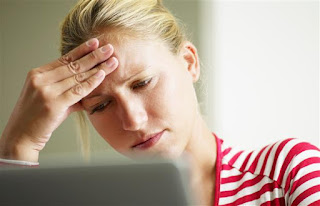 So, she said, it’s not surprising that burnout — feeling overwhelmed at work, or feeling that your work has no meaning — would be related to emotional eating.

But this study is the first to show that this is true, according to the researchers, led by Nina J. Nevanpera of the Finnish Institute of Occupational Health in Oulu.

The findings are based on 230 women ages 30 to 55 who were part of a clinical trial looking at healthy lifestyle changes. All were employed, and at the start of the trial they completed surveys on job burnout and eating habits.

Overall, 22 percent of the women had some degree of work burnout, according to Nevanpera’s team. And as a group, they scored higher on measures of emotional eating and uncontrolled eating.

On top of that, women who did not have job burnout at the study’s start tended to cut down on uncontrolled eating over one year. But, on average, the burnout group failed to make that change.

There was no obvious effect of burnout on the women’s weight, however. At the outset, half of the women reporting work burnout were normal weight — compared with a third of women reporting no burnout.

It is true that based on this study we can’t say that occupational burnout is associated with higher weight,” Nevanpera, the study’s lead researcher, told Reuters Health in an email.

One reason might be education, she noted. Women with work burnout generally had a higher education level, and education, in turn, was linked to lower weight.

Still, Nevanpera said, emotional eating is a potential risk factor for becoming heavy in the future. And it’s not a particularly healthy habit, she pointed out, since stressed-out people are more likely to reach for chocolate or fast food than an apple.

I agree that addressing sources of stress, in general, is important,” Pagoto said.

If you have a big stressor in your life,” she noted, you may have a lot of trouble losing weight, and keeping it off.”

And even if a person isn’t overweight, Pagoto said, emotional eating is still not a good idea. It’s reinforcing a habit that’s not healthy,” she said. If you reach for food to deal with an emotion, Pagoto said, you’re sending yourself the message, ‘I can’t handle this.'”

If you do tend to eat to deal with work stress, Pagoto suggested keeping your desk clear of snacks — or at least stocking up on healthy ones — and avoiding any workplace vending machines.

And when stress arises, choose other ways of managing it, like going outside for a walk. People often skip exercise when they feel stressed out, Pagoto noted. But that’s a mistake, she said, because exercise is the biggest antidote to stress.”