By Anne Harding
SUNDAY, March 25, 2012 (Health.com) — Popcorn isn’t just low in calories and high in fiber. Turns out the popular snack is chock full of antioxidants, too. 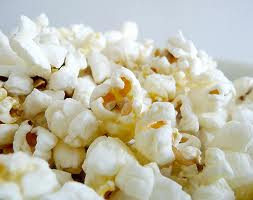 Per serving, plain popcorn contains nearly twice as many polyphenols as the average fruit, according to the preliminary results of a laboratory analysis presented today at the annual meeting of the American Chemical Society.
Polyphenols, a type of plant-based chemical found in foods ranging from vegetables to chocolate, help neutralize the harmful substances known as free radicals and are thought to protect against heart disease and other health problems.
“Nobody had paid much attention to popcorn as a source of anything other than fiber,” says lead researcher Joe Vinson, Ph.D., a professor of chemistry at the University of Scranton, in Pennsylvania, which funded the study. “Popcorn has more antioxidants in total than other snack foods that you can consume, and it also has quite a bit of fiber.”
Vinson and his colleagues analyzed four brands of commercially available popcorn. After grinding kernels (both popped and unpopped) into a fine powder, they separated out the polyphenols by adding a pair of solvents—a process that roughly mimics what happens in the stomach as food is digested, Vinson says.
A single serving of popcorn—about two tablespoons of unpopped kernels—contained up to 300 milligrams of polyphenols, the researchers found. By contrast, the average polyphenol content of fruit is about 160 milligrams per serving, while a single serving of sweet corn contains 114 milligrams.
Some types of polyphenols are pigments, and in fruit the biggest concentrations tend to be found in the skin and seeds. Similarly, the hull or outer skin of the corn kernel—the stuff that gets stuck in your teeth when you’re munching away—was the richest polyphenol source. “That’s where the antioxidants are, that’s where the fiber is,” Vinson says. “You shouldn’t throw that out.”
source: health.com