(Reuters) – Critics of genetically modified crops are making new demands for government mandated labeling to identify foods on grocer shelves that contain ingredients from transgenic corn, soybeans and other crops.

Labeling drives are underway on both state and federal levels, and on Tuesday several U.S. consumer groups released a survey and results of a petition drive that they say shows overwhelming consumer support for labeling of foods containing genetically modified organisms (GMO).

“People believe they have a right to know what goes into their bodies,” said Mark Mellman, a public opinion pollster and consultant.

The Mellman Group survey released Tuesday said based on a polling of 1,000 voters last month, about 91 percent support labeling of GMO foods while 5 percent oppose such a move. Support was nearly equal among Democrats, Republicans and Independents.

The survey was commissioned by a group called “Just Label It” that includes organic farming groups, along with representatives from the medical and retail industries and some faith-based groups. Similar surveys issued recently have also shown widespread support for labeling as consumers express increasing concern about overall food safety.

The Just Label It group, which filed its petition with the Food & Drug Administration on October 12, 2011, claims to have more than 1 million signers. 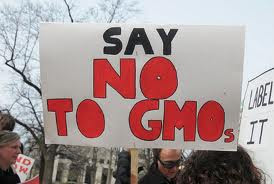 Tuesday marks the end of the 180-day comment period that precedes a formal FDA response. Petitioners say that the petition process allows them to pursue “judicial review” if FDA fails to act.

“Should it be denied the next step we would consider would be litigation,” said environmental attorney Andrew Kimbrell who wrote the petition.

“The GMO issue is finally getting traction in the U.S., in the form of an overwhelming preference for labeling among consumers across the political spectrum,” said Ken Cook, president of the Environmental Working Group, a non-profit public health and environment advocacy organization.

FDA declined to discuss the labeling petition, saying that it would respond directly to the petitioner. But a spokeswoman did say that FDA’s position on labeling of genetically modified foods is rooted in the premise that there is no “material difference” in foods containing ingredients from genetically modified crops and foods made from conventional crops.

“Companies are welcome to label their products on a voluntary basis as long as it’s truthful and not misleading, and it doesn’t imply that it’s somehow better than the conventional counterpart,” said Siobhan DeLancey, an FDA spokeswoman.

Alongside the national push, the GMO labeling debate is also active in California, where a grassroots coalition of consumer, public health and environmental organizations has submitted what it calls the “California Right to Know Genetically Engineered Food Act” to the state Attorney General.

Backers of the measure must obtain more than 500,000 signatures by April 22 to get it on the November ballot. They say that in addition to giving consumers information about what they are eating, labeling would also allow health professionals to track potential adverse health impacts of GMO foods.

The question of safety is separate, though related, from the issue of labeling, according to Mellman.

“Calories aren’t unsafe… but people want to know what they’re ingesting,” he said.

Leading biotech crop developer Monsanto Co. and other agricultural biotech seed companies are opposed to labeling, saying it misleads consumers and there is no safety concern with GMOs.

More than 40 countries have some requirements for labeling of genetically engineered foods, with Europe a prominent leader in mistrust of genetic alterations to crops.