People should go outside and soak up some sunshine to help increase their vitamin D levels, a charity is urging.

The government recommends vitamin D supplements for pregnant women and children aged under five.
But, on sunny days, a few minutes outdoors should achieve the same results, the charity says.
In January the chief medical officer for England said she was concerned that young children and some adults were not getting enough vitamin D.
Figures show that up to a quarter of the population has low levels of vitamin D in their blood and the majority of pregnant women do not take vitamin D supplements.
People aged over 65, pregnant and breast-feeding women and children aged six months to five years old are thought to be most at risk. 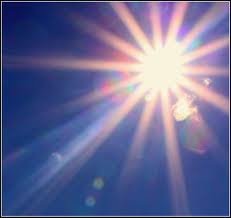 From June to August just 15 minutes outside is generally enough time”
Vitamin D is essential to help the body absorb calcium from food.
Low levels can result in serious problems with the health of our bones.
Alan Silman, medical director of Arthritis Research UK, said the advice was simple: “When the days are sunny, go out for a few minutes and expose your face and arms to the sunshine.”
But he also had a warning on overexposure: “Don’t allow your skin to go red, and take care not to burn, particularly in strong sunshine and if you have fair or sensitive skin.
“From June to August just 15 minutes is generally enough time.”
The sun’s UV levels are not yet strong enough over the UK for our bodies alone to make enough vitamin D.
He said: “In less sunny months, we recommend that people top up the vitamin D in their diet by eating more oily fish such as salmon, tuna, trout, mackerel, pilchards and sardines, and foods ‘fortified’ with vitamin D, such as breakfast cereals and some margarines.”
source: bbc.co.uk