Whether you’re a self-doubter or a procrastinator, breaking a bad habit is easier than you think. Check out expert advice on how to get rid of these unhealthy habits.

Do you always say yes when you really mean no? Do you think “I can’t” instead of “I can”? Or do you tend to put off until tomorrow what you should do today? Whether we’re procrastinators, pessimists, perfectionists or pleasers, most of us have at least one self-defeating behaviour we’d like to change. “We tend to believe these behaviours are part of our personalities because they’ve been so reinforced over time,” says Kimberly Moffit, a psychotherapist in Toronto. Eventually, they become habits – familiar and comfortable, though sometimes unhealthy, ways of operating. But behaviours, like habits, can be turned around.

1. You often doubt yourself You’re afraid to ask for a raise, volunteer to chair a school committee or even try out a new recipe because you don’t believe you’re up for the challenge. It’s often a lot easier to sit still than to take action that comes with risks. But the problem with always saying “I can’t” is that it becomes a self-fulfilling prophecy. If you think you’ll fail, there’s a good chance you will. “The people who are successful aren’t necessarily the smartest or the most talented — they just believe they can do it,” says Moffit. “That self-confidence opens doors.”
Break the habit: Change your focus. Instead of dwelling on what you consider to be your negative qualities, remind yourself of all of your good ones. “OK, so I’m not a gourmet cook, but my daughter loves my homemade spaghetti sauce and peanut butter cookies.” Be your own BFF. You wouldn’t insult your best friend by calling her a loser or a klutz every time she makes a mistake, so why treat yourself that way? Replace negative self-talk (“I can’t believe I screwed up again!”) with more positive statements (“I tried my best and learned something valuable from the experience”). It may sound hokey — but it works.

You just received a rave performance review, but you’re still convinced your job is on the line. You make plans to try out a new restaurant, but you’re sure you won’t like the food. Debbie Downer tends to see life through grey-coloured glasses: There are never solutions, only problems. By always focusing on what’s wrong — with yourself, others or circumstances — you’re hard-pressed to find joy in anything. Break the habit: Do something you love. “Whether it’s horseback riding or playing the piano, being able to succeed at something that gives you confidence and lets you look at life more optimistically is the first step to pulling yourself out of a rut,” says Moffit. Look for a boost. Ask your friends and family to list the qualities they like most about you. (You may be surprised at how many they come up with.) Regular pep talks from people you care about can go a long way toward making you feel better about yourself.

3. You often react angrily You get irritated and frustrated, and blow up at your partner, your kids and even the cat for no apparent reason. You can blame it on your ramped-up, too-busy lifestyle. When we’re under pressure, everything takes on more urgency and there’s increasing pressure to get things done as quickly as possible. “If you stuff down all that stress and try to ignore it, it usually pops up in unexpected places, like snapping at others,” says Natasha Barber, a counsellor in Vancouver. Break the habit: Get physical. Exercise, sports or any kind of physical activity — walking up and down the stairs at work or mopping the floor at home — helps drain off all that stress, energy and anger, says Dr. David Posen, a physician, lifestyle counsellor and author of Always Change a Losing Game(Firefly, 1994). Reprioritize. When you’re running your kids around to piano, drama and other activities on top of a full work schedule and a commitment-packed weekend, you’re bound to be crabby and tired. Sit down as a family and decide what to cut out (no matter how educational, enriching or just plain fun it is) to restore some balance. Too much of even a good thing is still too much. 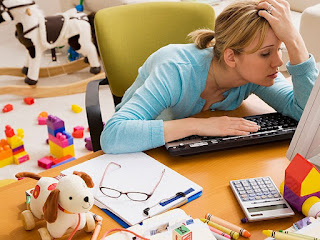 4. You’re a people pleaser You spend your days running errands, doing favours, saying yes when you really want to say no, and serving everyone’s needs but your own. Women are often excellent pleasers. “We naturally want to take care of everyone in our lives,” says Moffit. “But if we say yes to everybody who asks us for something, they come to expect it and have a lot less respect for our time and effort.” We end up feeling angry, resentful and anything but happy. Break the habit: Get comfortable saying no. “It might feel hard at first,” says Moffit, “but after a while it’s going to feel really good.” Even if it’s something you want to do, give yourself time to check your calendar to make sure it’s feasible. Your new mantra: “Let me get back to you on that.” Practise saying yes to yourself. When you wake up every morning, ask yourself what you need today. Maybe it’s a long walk, a mani-pedi or 10 minutes to enjoy a cup of your favourite brew.
5. You’re usually procrastinating You’ve convinced yourself that you perform better under pressure, and that cleaning the toilet bowl is more important right now than that looming deadline. Procrastinators tend to overestimate the time they have left to perform tasks, underestimate the time it takes to complete them and overestimate how motivated they’ll feel next week, next month or whenever they’re putting things off until. Actively looking for any kind of distraction (tweeting, texting and emailing are tailor-made for this behaviour type) is often a way for procrastinators to deal with their fear of failure: “If I’d had more time to prepare for the presentation, I would have aced it.” Break the habit: Just do it. It sounds simplistic, yes, but you’ll find it takes up a lot more time and energy to put off a task than it does to actually do it. Start small and build momentum. Use a timer to force yourself to sit still and focus for one hour — no interruptions, no breaks. You’ll be amazed at how much you accomplish in 60 distraction-free minutes.
6. You’re a control freak You have a hard time letting anyone else do, well, pretty much anything without micromanaging. “Control comes from a place of wanting to be needed and valued, and to feel that everything is going the right way,” says Moffit. “And if you have kids, you want to make sure that every detail is accounted for.” There’s nothing intrinsically wrong with that, but if you can’t even trust hubby to buy the right diapers or detergent, don’t be surprised if you’re the one who’s always changing little Abby and doing the laundry. Break the habit: Focus on what counts. Often the things we’re trying to control are not actually the things that matter. “I’ve rarely heard a woman say her vacuuming means a lot to her!” says Moffit. Focusing on what’s really important in your life — family, friends, good food and laughs — will allow you to relax in other areas. And when all else fails, lower your standards, advises Posen. Stop micromanaging. Start small, perhaps by allowing your six-year-old to pick out her own school outfits and your husband to help with the kids’ homework. Make a commitment to yourself today to truly not sweat the small stuff, like whether your child’s clothes match or Johnny is colouring inside the lines.
3 more tips for breaking bad habits:

1. The brain takes 30 days to accept new changes, so be patient. Once you build momentum, it’s easier to keep going and it starts feeling more comfortable, says Dr. David Posen, a physician and author of Always Change a Losing Game (Firefly, 1994).

2. Whenever you start doubting your ability to change, tack the words “right now” onto whatever you’re thinking, advises Natasha Barber, a registered clinical counsellor in Vancouver. “I’m overwhelmed right now and it’s going to get better. I’m going to rethink and reprioritize.”

3. Create positive self-affirmations. “Often these behaviours come about because we’re feeling insecure about ourselves,” says Kimberly Moffit, a Toronto psychotherapist. “Find something to repeat to yourself throughout the day that makes you feel good.”