Yes, Says National Drug Expert
Compare the proportion of obese people in America to those who are addicted to drugs and then try to argue that food isn’t as addictive as crack cocaine, says Dr. Nora Volkow, the director of the National Institute on Drug Abuse.
By MAIA SZALAVITZ April 5, 2012
Can food really be as addictive as drugs? In an impassioned lecture at Rockefeller University on Wednesday, Dr. Nora Volkow, director of the National Institute on Drug Abuse, made the case that the answer is yes and that understanding the commonalities between food and drug addictions could offer insights into all types of compulsive behavior.
Volkow began by acknowledging that the idea is controversial. “This is a concept that is rejected by many people,” she said. “It has polarized the [addictions] field.”
Many experts dismiss food as an addictive substance because it doesn’t lead to most people behaving like addicts — compulsively seeking food despite negative consequences. So, the reasoning goes, food can’t be as addictive as a drug like crack cocaine.
What that fails to recognize, however, is that crack cocaine itself isn’t as addictive as is commonly believed. “If you look at people who take drugs, the majority are not addicted,” Volkow said. Indeed, even for drugs like crack and heroin, fewer than 20% of users become addicted.
In contrast, if you look at the proportion of people who are currently obese — some 34% of adults over 20 — it’s a significantly larger group. Add in those who are overweight, and fully two-thirds of Americans clearly have significant difficulties controlling their food intake. So, measured by the proportion of those who behave in health-risking ways with each substance, food could actually be considered several times more “addictive” than crack.
Volkow went on to describe the common dysfunctions in the areas of the brain involved in pleasure and self-control that are seen in both food and drug addictions. These systems rely on the neurotransmitter dopamine; in both drug addictions and obesity, reductions in the number of dopamine D2 receptors are common.
In brain areas associated with self-control, the loss of D2 receptors is linked with a weaker ability to resist temptation. In regions that process pleasure, a reduction in receptors is associated with diminished enjoyment of food or drugs. “You can create animals that do not produce dopamine,” said Volkow. “They die of starvation. They don’t eat. It’s as dramatic as that.”
Drugs were once thought to be uniquely addictive because of their outsized effect on the brain: they can raise dopamine levels far higher than natural experiences like sex and food, at least in the lab. This was believed to create chemical imbalances that the brain isn’t equipped to regulate. 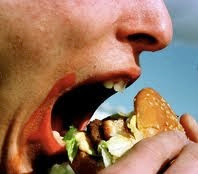 However, many argue that the modern food environment, a universe of plenty that has been engineered to deliver as much sugar and fat as cheaply as possible — certainly a stark contrast to the feast-or-famine circumstances in which humans evolved — may have actually created a similar imbalance.
To illustrate the point, Volkow summarized the research on the hormone leptin, a key player in humans’ feelings of hunger and satiety. Leptin, which is released by fat cells, helps regulate appetite by telling the brain, “We’re full, stop eating.” Normally, when leptin levels are high, food becomes less attractive. Our old friends, the D2 receptors, seem to be involved here: leptin reduces their activity. Obese people, however, lose their sensitivity to leptin, meaning that the hormone is no longer able to signal effectively, “That’s enough.”
There’s some evidence that leptin also plays a role in substance addictions. “In animal models, we know that leptin modifies the rewarding effects of alcohol and possibly cocaine,” Volkow told me. “In obesity, there is leptin tolerance but we do not know if there are changes in leptin sensitivity associated with drug addiction [in humans].”
One key difference between food and drug addictions is that when it comes to eating, both the body and the brain can send signals about whether the stomach is full and no more food is needed, or whether blood sugar is low and hunger should kick in. But with drugs, while such signaling hormones as leptin may have some influence, there are no similar bodily signals of being “full.”
Basically, regulation of food intake is more complex than drug use. That may help explain why there have been so many failures of anti-obesity drugs. But the similarities between hunger for food and for drugs suggest that if we do develop a drug that fights obesity, it may also help treat other addictions — and vice versa.
While the is-food-addictive debate shows no signs of ending, the label itself may not be that important. What matters most is finding ways to adapt our brains and behavior to the modern environment, one that contains intensely attractive food and drugs — along with highly politicized arguments about how to regulate them.
Volkow’s lecture was sponsored by the PATH Foundation, a nonprofit brain research organization in New York City, and was attended by Congressman Jerrold Nadler (D-NY) as well as by the former Democratic New York governor David Patterson. (His predecessor, Republican George Pataki, was also scheduled to attend, but couldn’t make it at the last minute.)
In his introduction of Volkow on Wednesday, PATH Foundation head Dr. Eric Braverman noted that the need for action is urgent. The best predictors of quality of life and longevity, he said, involve the amount of fat stored in people’s bodies — and more is not better.
Maia Szalavitz is a health writer at TIME.com
source: Healthland.time.com