Hold the bacon, hold the sausage. Researchers in Sweden suggest that eating an extra 50g of processed meat each day — that a couple of slices of bacon or a link of sausage — could increase your risk of pancreatic cancer by 19 percent. 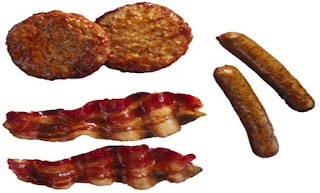 Pancreatic cancer has a relative survival rate of about 5.5 percent, making it one of the most lethal types of cancer.

Processed meat has been linked to a host of other health problems.

Associate Professor Susanna Larsson, study author based at the Karolinska Institutet, said in a press release:

“Pancreatic cancer has poor survival rates. So as well as diagnosing it early, it’s important to understand what can increase the risk of this disease.

“If diet does affect pancreatic cancer then this could influence public health campaigns to help reduce the number of cases of this disease developing in the first place.”

“The jury is still out as to whether meat is a definite risk factor for pancreatic cancer and more large studies are needed to confirm this. But this new analysis suggests processed meat may be playing a role.

“We do know that, among lifestyle factors, smoking significantly ramps up the risk of pancreatic cancer. Stopping smoking is the best way to reduce your chances of developing many types of cancer and other diseases as well.”