Spices do a whole lot more than liven up food. Research has found that the active ingredients in several common spices can help keep you alive by preventing platelet aggregation and blood clot formation up to 29 times better than aspirin, offering a much safer alternative to anti-clotting drugs such as Plavix. And they do it without side effects. 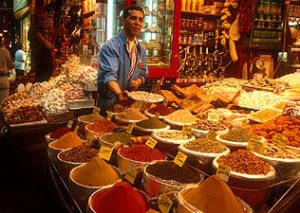 Scientists in India have done extensive testing to determine the health benefits of spices traditionally used in Indian cuisine. The latest research to come from the Central Food Technological Research Institute evaluated the effect of the active principle spice compounds eugenol, capsaicin, piperine, quercetin, curcumin, cinnamaldehyde, and allyl sulphide on human platelet aggregation. They demonstrated that each compound evaluated was able to significantly inhibit blood clotting. Furthermore, the compounds performed their anti-platelet aggregation activity against several different factors that promote the clotting of blood.

Eugenol and capsaicin were found to be the most potent inhibitors of induced platelet aggregation. This ability was shown by the other tested compounds too in the declining order of curcumin, cinnamaldehyde, piperine, allyl sulphide, and quercetin. Eugenol was found to be 29-fold more potent than aspirin in inhibiting ararachidonic acid induced human platelet aggregation. Both eugenol and capsaicin inhibited production of clotting factors in a dose-dependent manner.

Cardiovascular disease and inflammation often go hand in hand. Earlier research by this team of scientists found that eugenol was highly effective at inhibiting inflammatory conditions in humans.

Eugenol is the active compound that gives cloves their aroma. It is also found in cinnamon, nutmeg and lemon balm. Eugenol is also used medicinally as a local antiseptic and analgesic. It has antioxidant and pain relieving properties.

Spicing up food with cloves or other spices containing eugenol is best way to get this active compound into your diet. Eugenol is also available as essential oil for use in lotion and massage oil, or as aromatherapy in diffusers. Extracted eugenol should not be consumed internally.

Capsaicin is the active compound in hot peppers and the one that creates the heat. It is found in hot sauce, chili peppers, or as cayenne pepper. Aside from reducing platelet aggregation, capsaicin has a distinguished history as a cancer fighter through its ability to make cancer cells die. It is particularly effective against prostate and other hormone dependent cancers. Capsaicin sooths the digestive tract and may be a cure for inflammatory bowel disease. Eating chili peppers has been shown to protect against the effects of aspirin on the stomach.

Capsaicin protects the heart through other mechanisms besides inhibition of platelet aggregation. It reduces cholesterol and triglycerides, and has been shown able to dissolve fibrin, another action through which it can protect against blood clots. Cultures around the world that use hot peppers liberally have significantly lower rates of heart attack and stroke than cultures that do not.

Getting red pepper into the diet is easy. It is often kept on kitchen tables in the form of hot sauce, and sprinkled on meat, fish, side dishes, and snacks. Hot sauce is a natural accompaniment to Mexican and many other foods. Chili made with fresh tomatoes and hot peppers offers the two major players against prostate cancer in one meal. Even a simple bowl of beans gets up to dance when hot sauce is added.

For anyone wanting a quantifiable amount of capsaicin, there are capsules available.

Curcumin is one of the best known herbal healers. It is the active ingredient in turmeric, one of the staples of Indian cooking. Turmeric has been used for centuries to help treat health conditions and is also a tradition in Chinese medicine. It has recently been shown to strengthen and order cell membranes, making cells more resistant to infection and malignancy. Turmeric treats digestive issues, arthritis, menstrual problems, and liver and gallbladder issues. It is one of the best natural pain relievers and has shown to be more effective at relieving pain that NSAIDS such as ibuprofen, without side effects. Turmeric also offers strong defense against colitis.

While curcumin is preventing blood clot formation, it is also preventing the oxidation of cholesterol, offering protection against blood vessel damage and plaque build up that can lead to heart attack and cancer. There is even mounting evidence that curcumin can keep away neurodegenerative disease through its ability to cross the blood-brain barrier and act as an antioxidant.

Turmeric can spice up anything from baked potatoes to elaborate curries. It is a highly tasty addition to lentils. Both turmeric and curcumin are widely available in capsule form.

Cinnamaldehyde comes from cinnamon and provides that heavenly fragrance and spicy taste loved by almost everyone from childhood on. Cinnamon has been a popular healer for more than 2000 years, and is a powerful regulator of blood sugar levels. Taking one half teaspoon a day can completely normalize blood sugar for many people. Cinnamon has a beneficial impact on cholesterol, lowering LDL levels. It is a digestive aid and antibacterial.

Piperine is what gives black pepper its kick. It provides an overall health boost and is effective against colon cancer and inflammation. Sprinkling black pepper on food increases the bioavailability of its nutrients. Piperine can be ordered in capsule or tablet.

Allyl sulfide is found in the oil of garlic and is one of the compounds that gives it such a unique odor. The health benefits of garlic are legendary. Allyl sulfide is not available as a supplement and must be obtained by eating garlic or buying garlic supplements. Crush a clove of fresh organic garlic just before eating and add it to your food. The taste will be sensational, and you will get all the benefits garlic has to offer. Many of these benefits are lost if garlic is added to food while it is cooking.

Cloves, red pepper, turmeric, cinnamon, black pepper, and garlic are all sold at traditional supermarkets and discount stores, often in ground form. These products may add a small amount of flavor to food, but they are deficient for anyone trying to get their health benefits.

To buy high quality herbs, visit a local spice shop or order them from a spice retailer online. This way you can get organic herbs and spices that have their full range of nutrients and are not irradiated or sprayed with pesticide.

When you order herbs as tablets or capsules, unless the product states it is organic, it is not. Organic herbs sold in capsule form are difficult to find and are quite expensive. It is much more economical to purchase from a spice shop. The top spice shops package their spices in glass bottles that assure a tight seal. They can be kept in the freezer for many months.

Taking a quantified dose of a whole herb that is not encapsulated may seem like a chore, but it can be quickly gotten used to. Remember that these are herbs, not drugs, so there is not the need to be overly precise about the amount taken. Once you have established the amount you wish to take, put it in a 1/8 or 1/4 sized teaspoon, open your mouth, place it on the back of your tongue, and swallow with water or tea.

About The Author: Barbara is a school psychologist, a published author in the area of personal finance, a breast cancer survivor using “alternative” treatments, a born existentialist, and a student of nature and all things natural.