A recent trip to one of the big health food stores in Toronto led to a rather shocking result: many “health foods” aren’t very healthy! 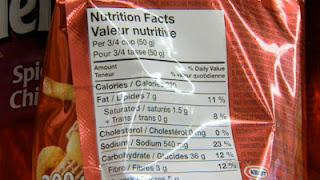 From code names for sugar to questionable claims on salt, I saw many processed and packaged foods posing as healthy fare. I’ve been a dietitian for over 12 years, and even I was duped by some of the clever marketing tactics.

Whether you are shopping at your favourite grocery store or at the mom and pop vitamin shop down the street, watch out for these common tricks that can mess up your best intentions for eating well.

‘Made with real fruit’

Note to readers: An apple is real fruit. A banana too. But a jam-like purée made with buckets of sugar is not real fruit, no matter that the label says.

An actual piece of fruit is a powerhouse of nutrition. Packed with fibre, vitamins and natural antioxidants, fruit can help fight the cellular damage that leads to heart disease and cancer. However, once the fruit is processed, stripped of fibre, and the vitamin C has been cooked out of it, the nutritional value is no longer the same. So, those cereal bars, toaster pastries and gummy candies don’t count as a serving of fruit. They are sugar, pure and simple.

How sweet it is

Many products with a healthy glow are sweetened with “organic evaporated sugar cane juice” instead of refined white sugar. Guess what? Whether it’s organic or not, when you evaporate sugar cane, you get SUGAR. Sure, evaporated sugar cane juice doesn’t undergo the same degree of processing that refined sugar does and therefore it retains a few more minerals – literally trace amounts of calcium and potassium. Call me crazy, but instead of eating sugary foods, I’d rather get potassium from a banana and calcium from low-fat yogurt. And despite the level of refinement, both sugar and evaporated cane juice have a negative impact on blood sugar levels, triglycerides and weight.

Once in a while, it’s okay to indulge in something sweet. But, don’t believe that you are eating something that’s “good for you” because the sugar is minimally processed or organic.

In Canada, a company is legally permitted to reduce sodium in their product by 25% and make an on-pack claim that says: ‘sodium reduced.’ While it is commendable that some companies are looking to reduce their sodium levels, sometimes a 25% reduction isn’t enough. Case in point:

We only need 1,500 mg of sodium in our diet each day, but most Canadians get closer to 3,400 mg. Do we really need 735 mg from a simple cup of broth? That’s HALF of our daily sodium intake – all for about 20 calories. Will that fill you up at lunch? Not me.

Instead of “sodium reduced”, look for products that claim “no added salt” or “low in sodium.”

Ah, “smart” foods. From popcorn to bread to pasta, many companies have jumped on the “smart” bandwagon, and use this tempting word on their packages. Smart products are usually enriched with something – omega-3 fat or fibre, for example. But often, that’s not the whole story. Smart snacks may be high in fat, salt and sugar. Smart pasta may be made with mostly refined flour and have a type of fibre called inulin, which doesn’t have the same bowel-friendly effect of whole grain pasta.

So if they aren’t the healthiest option, what’s smart about these products? The marketing. They play with consumers’ sense of self-worth (everyone wants to be smart, right?), and use trickery to make the products seem healthier than they are.

Before you buy something “smart,” read the ingredients and Nutrition Facts to get the whole story.

The other amazing thing I have recently noticed at a number of grocery stores is the presence of an in-store registered dietitian. They are on-site to offer grocery store tours, help you choose healthier products and wade through the marketing hype. Now that’s smart!