Quinoa (pronounced Keen-wah) is an ancient food that is not yet well known in North America. It has been cultivated in South American Andes since at least 3,000 B.C. and has been a staple food of millions of native inhabitants. The ancient Incas called quinoa the “mother grain” and revered it as sacred. Each year at planting time it was traditional for the Inca leader to plant the first quinoa seed using a solid gold shovel! Quinoa was used to sustain Incan armies, which frequently marched for many days eating a mixture of quinoa and fat, known as “war balls.” Beginning with the Spanish conquest in the 1500s, there was a 400-year decline in the production of quinoa. It became a minor crop at that time and was grown only by peasants in remote areas for local consumption. 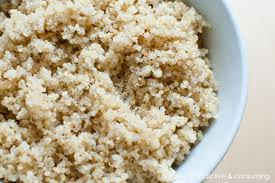 In Peru, Chile and Bolivia, quinoa is now widely cultivated for its nutritious seeds, and they are referred to as “little rice.” The seeds are used in creating various soups and bread, and also fermented with millet to make a beer-like beverage. A sweetened decoction of the fruit is used medicinally, as an application for sores and bruises. Quinoa has been grown outside of South America for a relatively short time. It is grown in Canada and has been grown in the U.S., in Colorado since the 1980’s by two entrepreneurs who learned of the food from a Bolivian. They developed test plots in high arid fields in the central Rockies and began test marketing in 1985. Quinoa can be found in most natural food stores in the U.S.

Technically quinoa is not a true grain, but is the seed of the Chenopodium or Goosefoot plant. It is used as a grain and substituted for grains because of it’s cooking characteristics. The name comes from the Greek words, chen (a goose) and pous (a foot). This is due to a resemblance of the leaves of the plant to the webbed foot of a goose. The leaves are lobed or toothed and often triangular in shape. The succulent like plant grows from 4 to 6 feet high and has many angular branches. The flower heads are branched and when in seed looks much like millet, with large clusters of seeds at the end of a stalk. The plant will grow in a variety of conditions but favors a cool, arid climate and higher elevations. Beets, spinach, Swiss chard, and lamb’s quarters are all relatives of quinoa.

Quinoa grains range in color from ivory to pinks, brown to reds, or almost black depending on the variety. There are over 120 species of Chenopodium, but only three main varieties are cultivated; one producing very pale seeds, called the white or sweet variety; a dark red fruited variety called red quinoa; and a black quinoa. The seeds are similar in size to millet but are flat with a pointed oval shape and look like a cross between a sesame seed and millet. Quinoa has a delightful characteristic that is all it’s own: as it cooks, the outer germ around each grain twists outward forming a little white, spiral tail, which is attached to the kernel. The grain itself is soft and delicate and the tail is crunchy which creates and interesting texture combination and pleasant “crunch” when eating the grain. Quinoa has a fluffy consistency and a mild, delicate, slightly nutty flavor that borders on bland. The leaves of the Goosefoot (quinoa) plant are also edible and make a pleasant vegetable, like spinach. A quinoa leaf salad is generally more nutritious that most green salads.

Before cooking, the seeds must be rinsed to remove their bitter resin-like coating, which is called saponin. Quinoa is rinsed before it is packaged and sold, but it is best to rinse again at home before use to remove any of the powdery residue that may remain on the seeds. The presence of saponin is obvious by the production of a soapy looking “suds” when the seeds are swished in water. Placing quinoa in a strainer and rinsing thoroughly with water easily washes the saponin from the seeds. In South America the saponin which is removed from the quinoa is used as detergent for washing clothes and as an antiseptic to promote healing of skin injuries.

The quinoa seed is high in protein, calcium and iron, a relatively good source of vitamin E and several of the B vitamins. It contains an almost perfect balance of all eight essential amino acids needed for tissue development in humans. It is exceptionally high in lysine, cystine and methionine-amino acids typically low in other grains. It is a good complement for legumes, which are often low in methionine and cystine. The protein in quinoa is considered to be a complete protein due to the presence of all 8 essential amino acids. Some types of wheat come close to matching quinoa’s protein content, but grains such as barley, corn, and rice generally have less than half the protein of quinoa. Quinoa is 12% to 18% protein and four ounces a day, about 1/2-cup, will provide a childs protein needs for one day. The 6-7% fat of quinoa is relatively high when compared to other grains, but it boasts a low sodium content and also provides valuable starch and fiber. Quinoa also contains albumen, a protein that is found in egg whites, blood serum, and many plant and animal tissues. The seeds are gluten-free which makes this a nutritious and flavorful alternative grain for those with gluten sensitivity. Quinoa would be a worthy addition to anyone’s diet, supplying variety as well as good nutrition. The seed is also excellent feed for birds and poultry and the plant itself is good forage for cattle.

Cooked quinoa is excellent in hot casseroles and soups, stews, in stir-fries, or cold in salads. The seeds cook very quickly, in only 15 minutes. Uncooked seeds may be added to soups and stews as you would barley or rice and quinoa is often substituted for rice in rice dishes. Dry roasting quinoa in a pan or in the oven, before cooking will give a toasted flavor, and it can be cooked in fruit juice to add character to the flavor for use as a breakfast cereal or in desserts. Cold salads consisting of quinoa and chopped vegetables or cooked beans make a quick, easy, and nutritious dish. Quinoa flour is used in making pasta and a variety of baked goods such as pancakes, bread, muffins, and crackers. Quinoa seeds can be sprouted and eaten as raw, live food for snacks or in salads and sandwiches. To sprout the seeds, soak about 1/3 cup seeds in a jar for 2 to 4 hours, then drain and rinse the seeds twice a day for 2 to 4 days. When the sprouts are about 1 inch long, place them near a window for chlorophyll to develop, which will give them a vibrant green color. Another fascinating way of using quinoa is to “pop” the seeds in a dry skillet and eat them as a dry cereal.

Due to the relatively high oil and fat content of quinoa, the grains and flour should be stored in glass jars in the refrigerator. Use the grains within a year and flour within 3 months.